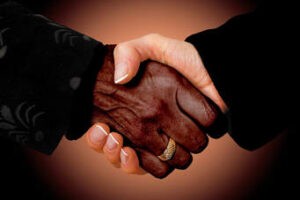 I have been thinking lately about how empathy goes hand-in-hand with respect.

You can’t really say you have empathy for someone, or for a group of someones, if you don’t give them the respect of taking what they say about themselves and their experiences and their preferences as true, because it is their truth. People get to define themselves, and you show them empathy by listening instead of disputing or contradicting them.

So, if Native Americans/Indians say they find it offensive that a sports team uses Indian tribal names (or the English version of tribal names) for their team name, or uses Indian images for their mascots or their team chants, you listen to them and you respect them and you have empathy for what this feels like to them. You certainly don’t argue that you are showing respect for their culture, when they are telling you that it is in fact the opposite. It is a disgrace that the professional football team from our nation’s capitol is called a clearly offensive name, which shows no empathy for the experience of Native Americans.

And if a woman tells you that what you are doing or saying feels patronizing or offensive to her, you show her respect. You really try to have empathy for her and understand what your actions or words feel like to her. Yes, it’s hard not to get defensive, and maybe you didn’t intend what you said or did that way. But its OK to say that you hadn’t realized how it came off to her, but now you do, because you have listened respectfully.

Respect extends to children, too. When your child is crying, because he has fallen down, or because her friend said she didn’t like her anymore, or because he is embarrassed by something he did in front of his peers, or for whatever reason… show her respect. Please don’t dismiss his feelings or his perception of his experience. Listen, show empathy. It’s one of the most powerful things you can do for your child.

You can show respect for others by checking in with them if you are unsure of the other’s feelings or desires. Ask the person in the wheelchair, “Can I hold the door for you?” And however she answers, respect that. Ask someone what pronoun they would like you to use for them. Ask an older person how they would like you to address them.

Respect extends to everyone, of whatever nationality, religion, ethnicity, ability, sexual orientation, occupation, age, or whatever. Everyone. You can’t really have empathy for someone if you don’t respect them first.