A reader of the last blog post commented that empathy for animals is equally as important as empathy for humans. Is this true? Do animals really “count for” as much as humans? To put it in a version of that classic question, would you rescue a drowning dog before a drowning human?

Or perhaps, is that a false question? One that throws us off the real issue.

I think empathy for humans goes hand-in-hand with empathy for animals. If you lack empathy for animals, chances are good you lack empathy for humans as well. I can never forget the worst job I ever had, babysitting one summer for a woman who completely lacked empathy, and was raising a next generation of equally non-compassionate children. The image of the 12-year-old son, who had found a garter snake, putting that snake down in the middle of the street and then riding his bike over it repeatedly until it was dead, is seared in my mind. As is the image of the mother coming home from work, finding food on the ceiling of the dining room, lining up her three children and whipping them repeatedly until one of them confessed.

Empathy for living beings is seamless. Most people have empathy for their pets, and empathy for other humans. The people described in my last post had empathy for a trapped bird, which drew them together in an effort to free it. A lot of good people I know do things like working at the Wildlife Center helping wolves, adopting abused animals into their homes, and swerving on the street to avoid running over turtles. They enjoy seeing animals in the wild, because they feel a connection.

As for myself, empathy for animals has taken a further step in the last few years. Although I became a vegan for health reasons, and for the health of the planet, empathy for animals has become the third leg of the vegan stool for for me. After reading the book, Living the Farm Sanctuary Life, and after seeing various documentaries showing the horrors of factory farming, such as “Food, Inc”, I can’t eat animals anymore. And it doesn’t really make it OK for me if the animals are raised humanely up until the moment they’re killed, although I will grant that this is far, far better than factory farming. As Gene Baur says in his book about his farm sanctuary program, “The more humans understand and respect other creatures on earth–and the earth itself–the more likely we all are to survive. … Our empathy is awakened when we connect with other living beings. That’s part of the magic of Farm Sanctuary. Visitors who have a dog or cat at home are often surprised by how quickly they form an equally strong bond with a cow, pig, duck or chicken. This bonding happens so often that our staff has grown accustomed to dealing with the constant outbursts from visitors: ‘I had no idea that turkeys had such personalities!’ ‘I never knew that sheep could be so sweet!'” Biz Stone, the founder of Twitter, visited Farm Sanctuary with his vegan wife, and afterward said: “It was as if I had flipped a switch. Oh my God, I am eating other earthlings.”

Empathy for other people, empathy for animals. It’s seamless. 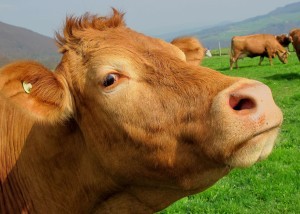