Mr. Rogers and My Father 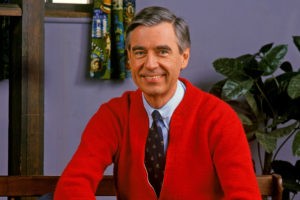 I recently saw the movie, “A Beautiful Day in the Neighborhood.” Also, I have been living through the last weeks of life for my 92-year-old father, who has terminal cancer. These things turn out to be connected.

It hit me that I have grown up with Mr. Rogers, essentially. My dad is strikingly similar to Fred Rogers, except that he has a loud, booming voice and laugh, where Fred Rogers was very soft-spoken. But in one very key element, they are similar: both men are highly empathetic.

I watched on the big screen as Mr. Rogers responded with profound attention and care to every person he encountered, whether a small boy with a life-threatening illness who visited him on the set–Mr. Rogers holding up the shooting of the show in order to give undivided attention to this boy, however long the encounter took; or to the journalist who was interviewing him for a magazine profile, which was the heart of this film. He didn’t just answer the journalist’s questions; he was more interested in getting to know him as a person. He clearly sensed that this journalist had deep unresolved problems and pain, and gently helped him to open up. He genuinely cared about this man, and the man, while resistant, could sense that. They developed a relationship. Mr. Rogers even prayed for the journalist and his family, as he did for many people each day.

So, yesterday I spent some time with my dad and his wife watching old home videos that I’d brought. One of them was of his retirement party. Dad’s last job had been as a counselor working for an organization that helped disabled people. Several of his clients–friends–were at the party. At one point, as we were giving toasts and such, Dad’s wife read a letter that a client had sent to Dad. She talked about how this “gentle man” had listened to her, week after week, for ten years, finally helping her understand that every single person has value and worth, every single person is unique and special–including herself.

Dad connects with every person he meets, whether it’s the nurses who helped him after his knee surgery, or the person checking him out at Target. He is genuinely interested in each individual person, and he will remember what they told him and will continue the conversation the next time he sees them, because he really listens. He has empathy in abundance, just as Fred Rogers did.